Imagine a radio that has the ability to do DMR, FUSION, DSTAR, P25 and NXDN.

Imagine a radio that can make its own code plug by analyzing the signals being transmitted.

Imagine a radio that knows where all the repeaters are and knows where you are and able to use that information to make a code plug on the fly.

Imagine a radio where you can program most of the parameters in the radio without a computer and without having to go through a complicated procedure to generate a new channel or edit the existing channel.

Imagine a radio where you can transmit beyond line of site without an internet connection.

Imagine a radio where you can seamlessly add a co-processor or your laptop to allow you to add digital modes not currently in the radio.

Imagine a radio where you can add new features to the radio without the manufacture's cooperation.

Imagine a radio that can connect to the internet without a hot spot.

This and more is the future of digital radios and what the CS800D PLUS will become.

The hardware of the CS800D PLUS is a CS800D with more memory, a GPS module and a few minor changes to the PCB. The key to some of the advanced features is the ability to tightly integrate a separate computer into this radio. This will allow much of the wisdom of the ham community to be integrated into this radio without having to design new hardware.

When you first get the CS800D PLUS, you will get Firmware that will do DMR and Analog exactly like the standard CS800D.

The next step will be to remove all the commercial features in both the radio and the CPS and expand the database to accommodate the final product. We will have links for most of the features but not the actual features themselves.

Then we start implementing the new features one at a time.

To accommodate the visually impaired and the ability to use many of these features without taking your eyes off the road, extensive use of voice prompts will be used.

How do we accommodate other digital modes?
The radio currently can only communicate using DMR and Analog. This section is going to show how we can extend it to also communicate using NXDN, FUSION, P25 and DSTAR.

NXDN, FUSION and P25 uses the same AMBE vocoder used with the DMR. DSTAR used a similar but different vocoder so the external computer will have to handle that vocoder. The patent for that vocoder has long expired so there should be no legal issues in using the technology.

The basis for this technique is to have certain functions that the radio can do, be done by the radio and other things are done by an external computer attached to the serial port of the radio.

The serial port is going to be time shared by two separate data streams as will be explained below.

Receive Mode
In this mode, the raw data is passed from the radio’s receiver at 8,000 samples per second using the A/D converter already built into the radio and used for DMR communication. At the same time, audio data is passed back to the radio using AMBE packets which then gets decoded by the AMBE Decoder in the radio which in turns goes to the speaker.

The External Computer
The external computer can be as simple as a single chip micro connected the DB15, a Raspberry Pi computer, or a standard PC. The key to this enhancement is the fact that the amateur community has already done most of the work already.

The cost of the radio has gone up recently and there is no reason why the trend is not going to continue. If the manufacturer wants to get microprocessors and other parts, he has to pay a premium for those parts and he passes on the increased cost to Connect Systems. By buying the radio now, you are locking in your cost 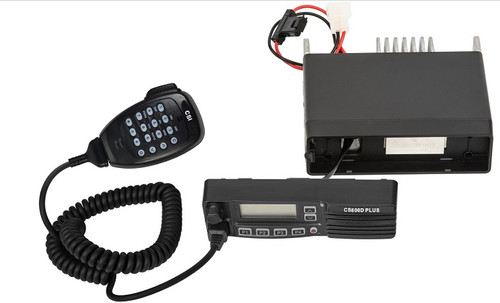